Southwest Florida has been in a a state of drought for the past few years, so the drenching overnight rain we received the other day was very welcome. 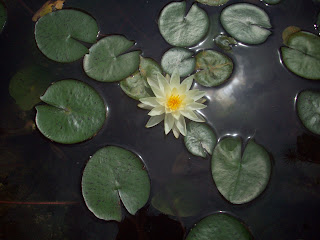 This is how the frog pond responded to the rain.

This is what the our pool looks like late on a sunny day. 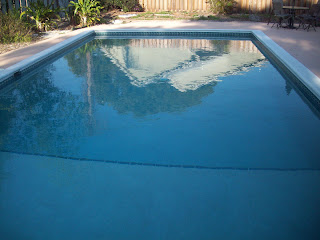 Today is overcast and breezy, so I noticed the concentric circle waves alongside the pool this morning. Grabbing the net I walked over to the side of the pool and landed me a creature. Chlorine is not good for such creatures, so ... 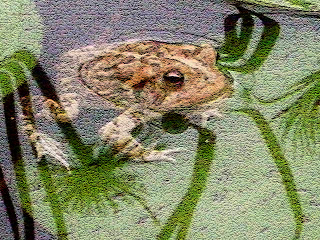 I transported him/her to the frog pond. He/she is adjusting to a smaller, but better environment than the swimming pool.
How can anyone not love frogs?
~ ~ ~
Posted by Unknown at Wednesday, March 30, 2011 4 comments:

Today I happily stumbled across an important little book I've been searching for during the past few weeks: Zen in the Art of Photography, by Robert Leverant, Images Press/San Francisco, 1969. 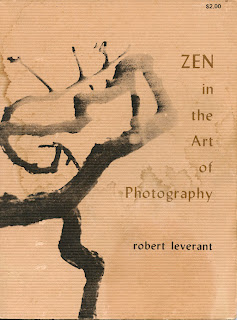 Stains on cover compliments of Hurricane Andrew.
The first time this book entered my life, it came with a perfect timing. This little, two dollar book arrived on Christmas eve of 1975.
In 1975 a visit to the in-laws in Rochester (the town that Kodak built), New York always meant another visit to the George Eastman house. I was, as usual, in the mood to browse over the latest exhibitions. As a relatively young man, I was re-evaluating my career options at the time.
Should I continue my college teaching career, or should I attempt to turn casual photography sales into a second career? That was the dilemma; this little brown book helped with my solution.
Robert Leverant presents us with 162 beautifully simple, poetic exposures of why we, who are infected by photography, want to make photographs. He reminds us that photography is to be found in the heart, how "Photography is ourselves" and how we reach out- and inside with our picture-making in  order to connect worlds.
Of course, in 1975 follow your heart made the most sense to me. Still does.
~ ~ ~
Posted by Unknown at Monday, March 28, 2011 No comments:

Email ThisBlogThis!Share to TwitterShare to FacebookShare to Pinterest
Labels: Zen and Art of Photography, Zen photography

Here is a letter I recently received from my youngest sister, Jeannie. Originally written to her family and friends, we believe this story about her neighbor Zachariah may be of interest to many more people. 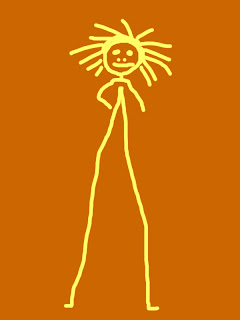 Dear family and friends,
Twelve years ago, when I moved to Jacksonville, Illinois, I fell in love with the boy next door: Zachariah Blan. He was a toddler at the time. I was a middle-aged single mom with a teenage daughter.
When Zach was ten, he was diagnosed with adrenal corticol carcinoma, a virulent form of cancer that strikes children. Zachariah endured a nearly three-year-long battle.
On Saturday afternoon, March 5th, Zach's big brother Josiah gave him a hot bath, which soothed Zach. Then Zach asked his mother if he could lie down on her bed; she asked if he would like her to lie down, too, and he said yes. Zach took a drink of water and settled his sweet head against his mother's chest. A few minutes later he died in her arms. He was 13 years old.
I was lucky to have lived next door to Zach from the time he was a toddling one year old until a few months before his death. Frequently, he came by to visit with me, and we would sit out on the porch and cuddle and talk. When he was five, he drew a picture of me all in yellow crayon; he gave me long long legs, which I appreciated. Apparently, from his five-year-old perspective, I was quite statuesque. One day he brought over his new dwarf hamster to show me, and often, Zach and I would spend time petting Princess, his family's yellow lab, in the backyard.
One of my favorite memories of Zach is of him racing through my house in the midst of an exciting outdoor game with his brother and cousins. I was in the living room reading peacefully when suddenly Zach burst through the front door, raced through the house and out the back door. I thought it was hilarious and loved the fact that he felt the freedom to just fly through my house when he needed an escape route.
A year or so later, I was working at night in my office at home. I could hear the neighborhood kids playing outdoors when, once again, my front door flew open. Zach and his cousin ran into the living room explaining that the big kids were chasing the little kids. "Do you want to know how to spy on the big kids?" I asked. Yes, absolutely, they did. I led them to my office, turned out the light, and behold: through two large windows, they could see the big kids searching for them. They spent a few minutes getting the lay of the land, then took off through the front door again when the coast was clear. What a treat for me to be part of the action.
Today, Friday, March 11th, I attended Zach's funeral and burial. I've just returned from the cemetery. Zach has a lovely spot on top of a hill with tall pine trees scattered here and there. Hundreds of people came to say good-bye to this sweet boy. It was a beautiful day, sunny and clear. After a brief ceremony I noticed two little boys holding bright yellow daisies in their hands running about the cemetery. Oh, the spirit of Zach lives on and on. He will always always live in my heart.
Please keep Zach's family in your prayers. They are people of great faith, but they are also in enormous pain.
Love and good health and safety to all of you,
Jeannie
"Death will come, always out of season."
--- Big Elk, Omaha Chief
Posted by Unknown at Friday, March 18, 2011 2 comments: 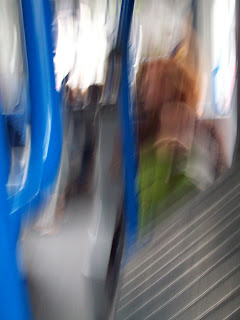