Approximately 240 quilts were shown by the Friendship Knot Quilters Guild. Pam and I weren't able to photograph them all, but here's a good taste of the bi-annual Quilt Show at the Sarasota Municipal Auditorium on March 13 - 14, 2009.
Posted by Unknown at Monday, March 23, 2009 No comments:

Last week Pam and I went to Sarasota's municipal auditorium to help her friends, the ladies of Friendship Knot Quilters' Guild, set up display racks for their biannual quilt show.
While Pam and her fellow quilters buzzed around the auditorium, I managed to click off a few ambient light snapshots with my trusty Kodak digital camera. These views should give you an idea of the kind of spirit that moved about during the setup.
I failed to get any self-portraits after my activities were directed toward the manly task of display rack erection. I was too busy sweating. Sigh.
Good news: the efforts of many bore fruit and the quilt show was a weekend success. For a show of Sarasota's Friendship Knot Quilters quilts, come back for tomorrow's posting of this blog.
Posted by Unknown at Saturday, March 21, 2009 No comments:

I just rediscovered this image in a folder entitled "August Eggs". It's a photoshop manipulation, of course, and it's colorful. Makes me think of Ukranian Easter Eggs.
But what is it? Where does the image derive from? 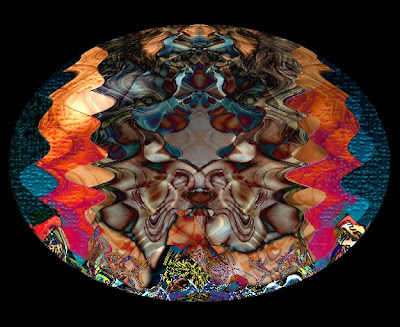 About ten years ago, in the month of August, I was making nautical charts on my computer over 80 hours a week. I had little time to enjoy the luxuries of eMail conversations. Most of my electronic correspondents were male, many of whom insisted in sending me X-rated images (it's a male bonding thing).
I was offended by the imagery, not because it involved naked people, but because most images were aesthetically ugly, pathetically predictable and inspirationally dead. So I decided to fashion a revolt against the ugliness and sexploitation; I decided to manipulate until I was satisfied with the image. Hence, tasteless porn sparked the August Egg Revolt.
Posted by Unknown at Thursday, March 19, 2009 No comments: