Threads of the Unconscious Mind

You may recall my interest in and tales of artists who tap their unconscious in ways which turn out to prophetize their demise. I've known two such artists personally; a painter of underwater scenes who drowned in Lake of the Isles and a sculptor specializing in bronze heads who loses his head to a machete.

Well, last week I came across another powerful example of such an artistic irony in Raleigh at the North Carolina Museum of Art.

Here stands the elemental death mask of Michael Richards, sculptor. Michael posed for his own sculpture emtitled "Tar Baby vs St. Sebastian"; a commentary on the shabby treatment afforded the heroic members of WW II's all black, Tuskeegee Airmen upon their return home from the War. 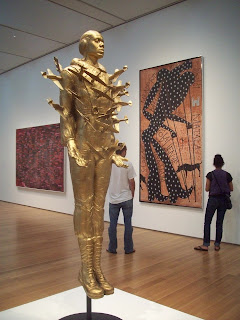 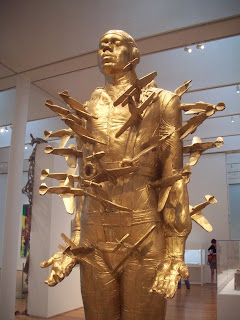 absolutely beautiful sculpture ... uncanny the ultimate demise of the sculptor.

Yes, ironic and uncanny. Sometimes, somehow, we (the artist preeminently) seek the form of our own demise.

I've always identified somehow with St. Sebastian. Is it the Catholic martyr boy complex? I remember seeing a rendition of the saint, in a glass covered tomb, out near the Appian Way in Rome. Very romantic to die that way, and be visited by so many pilgrims.