I was visited by the ghost of Andre Kertesz this morning.  The first time I felt his presence I was shooting with one of his students. Look into the familiar, he said, and find your picture there.
I found this dynamic composition on my pool deck in the early morning sunshine. The light and shadow play games of exaggeration in the early morning hours. The umbrella at the table is still folded, the day has yet to begin in earnest. We peer into a frame of negative forms. 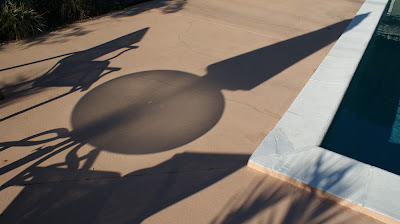 I was visited by the ghost of Andre Kertesz this morning.
Posted by Unknown at Saturday, May 09, 2009 No comments:

In the old days when we visited a new friend we always checked the titles on his book shelf to see what really made him tick. We believed books were reliable indicators of the man; that is, what the man thinks about in the privacy of his own thoughts.
We were a literate generation who studied vocabularies and grammars and penmanship until it came out our ears. After awhile we began to view the world from such a perspective. We noticed irregularities in speech and spelling and crummy penmanship. These things told us something about shared or non-shared experiences.
They also oriented us to the page, that is, to a thoughtful relationship with something held at arm's length. The page that influenced photojournalists and readers around the world also found a place in the common sizes of  8" x 10" and 11" x 14" photographs.
Photographs were best viewed, we  believed, at arm's length. I still prefer to print my pictures at page size. 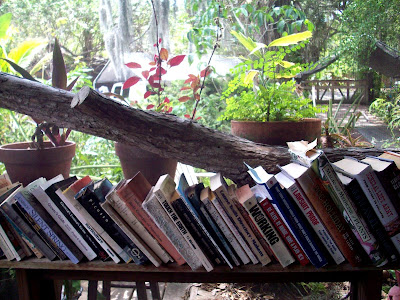 So, after his passing, when I viewed John's screen porch library, it felt like I was touching the man again in places where his thoughts and beliefs reside. The titles in his library tell us a lot about the man. Such is the power of books.
Posted by Unknown at Wednesday, May 06, 2009 No comments: